Carbon monoxide poisoning remains a real threat in many homes across the world today – but few people understand what the danger is or what the warning signs of carbon monoxide leaks look like. Fortunately, problems are easy to prevent with the right education and response.

What is Carbon Monoxide?

Carbon Monoxide (CO) is a carbon molecule made with one atom of carbon and one atom of oxygen (as opposed to the exhaust-related carbon dioxide, which has two atoms of oxygen). The molecule is produced in a number of different reactions, but it is most common when fuel is burnt in spaces with limited access to oxygen. It is a little less dense than air, which means that it tends to rise more easily than settle. CO is known as a relatively neutral gas, with few interactions with other compounds and an odorless, tasteless, colorless nature that makes it difficult to detect. It is also considered a highly toxic compound based on its effect on the human body.

Where is Carbon Monoxide Found?

When chemical reactions cannot access enough oxygen to create carbon dioxide, they produce carbon monoxide. As a result, carbon monoxide is produced in many types of combustion – this is why it is present in car exhaust and house furnaces. It also tends to be present in a variety of other gas burners, although the amount can vary considerably. The least efficient fuels, such as coal, tend to have the highest amount of CO.

Why is Carbon Monoxide Dangerous?

Carbon monoxide is absorbed and mixed with the bloodstream when inhaled. In high amounts (around 35 ppm) it begins to significantly interfere with the blood’s ability to absorb and carry oxygen – essentially, hemoglobin uses CO instead of the proper oxygen molecules. Nausea, dizziness, and unconsciousness are the result: Victims slowly suffocate, sometimes without realizing it.

Is There Any Way to Tell If I am at Risk?

Damaged furnaces and blocked chimneys are both common sources of serious CO problems. Poor ventilation in the presence of a furnace or fuel heater is another common cause. A large amount of soot around furnaces or gas fires may be one warning sign. The more yellow or red a flame (instead of blue), the more CO it is producing.

What is the Best Defense Against Carbon Monoxide Problems? 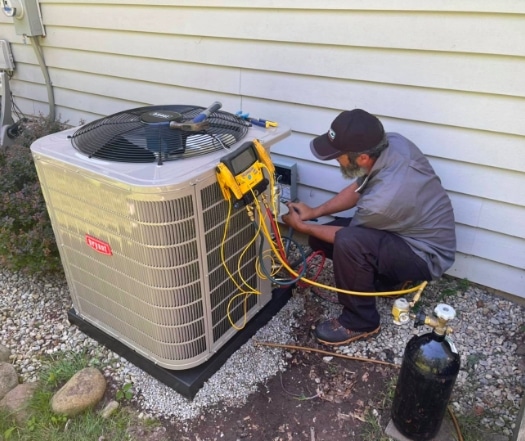 Mike Greene
23:30 07 Dec 22
As usual Wally from SHC did a great job. I highly recommend these people!